Eight beautiful reasons to explore the Bay of Arcachon

Small oyster-farming ports, sandy beaches, pine forests ... the Bassin d'Arcachon is located 30 miles from Bordeaux, but feels like another world. It represents a string of towns and villages, crowned with the famous Pilat dune and the charming peninsula of Lège - Cape Ferret. There are dozens of good reasons to discover this piece of France where the tides and the current have shaped an extraordinary landscape, but we've rounded up the top eight! 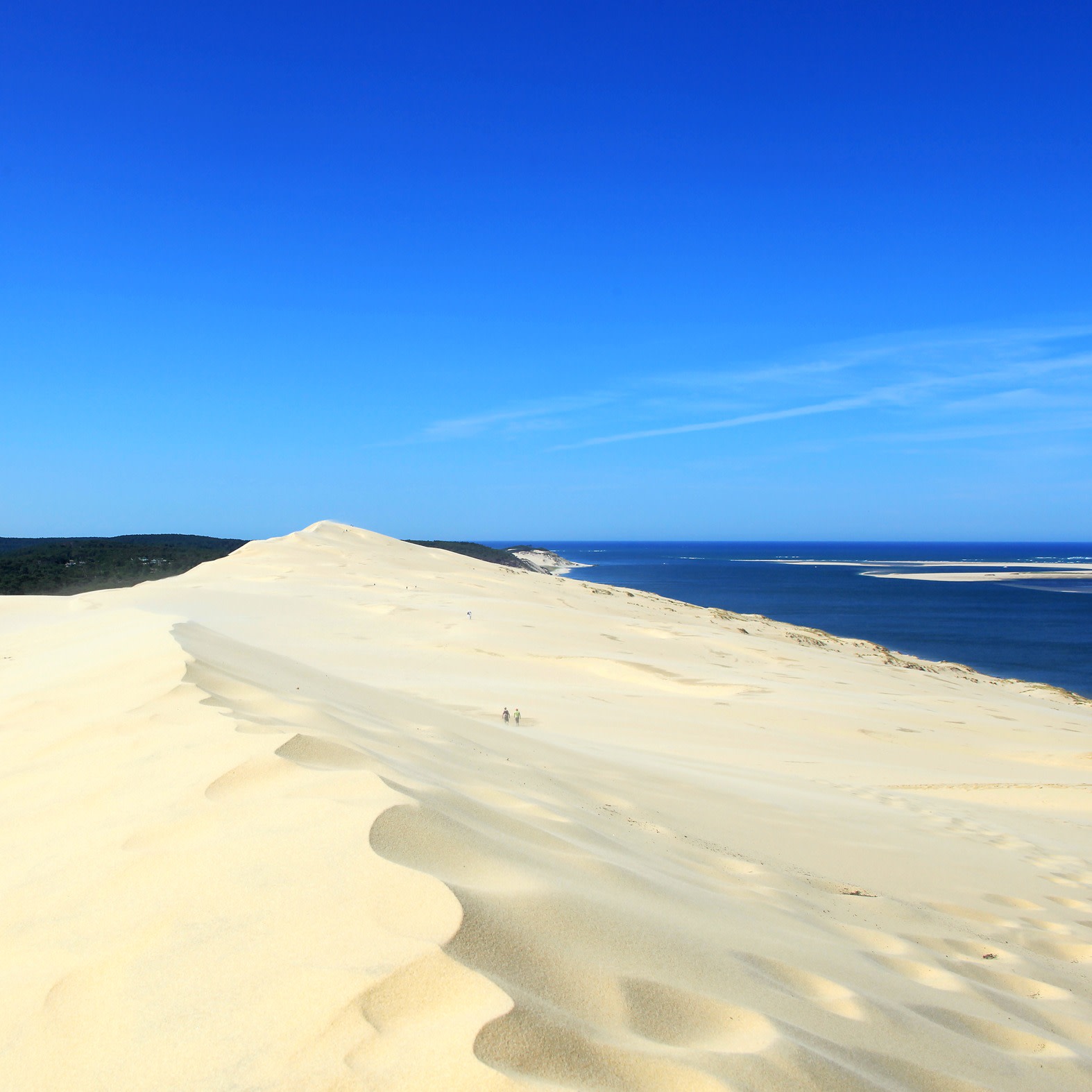 © SIBA  —  The Pilat dune is an incredible natural phenomenon.

Climb the highest dune in Europe
One hundred and nine meters high, 2,700 meters long, 500 meters wide, 60 million cubic meters of sand: the Pilat dune is a marvel of nature. It is absolutely necessary to climb to the top—at the summit, the 360° panorama over the Bassin d'Arcachon, the ocean, the Pointe de l'Arguin, the point of Cap Ferret, and the sprawling forest of pins is sublime at any moment of the day. 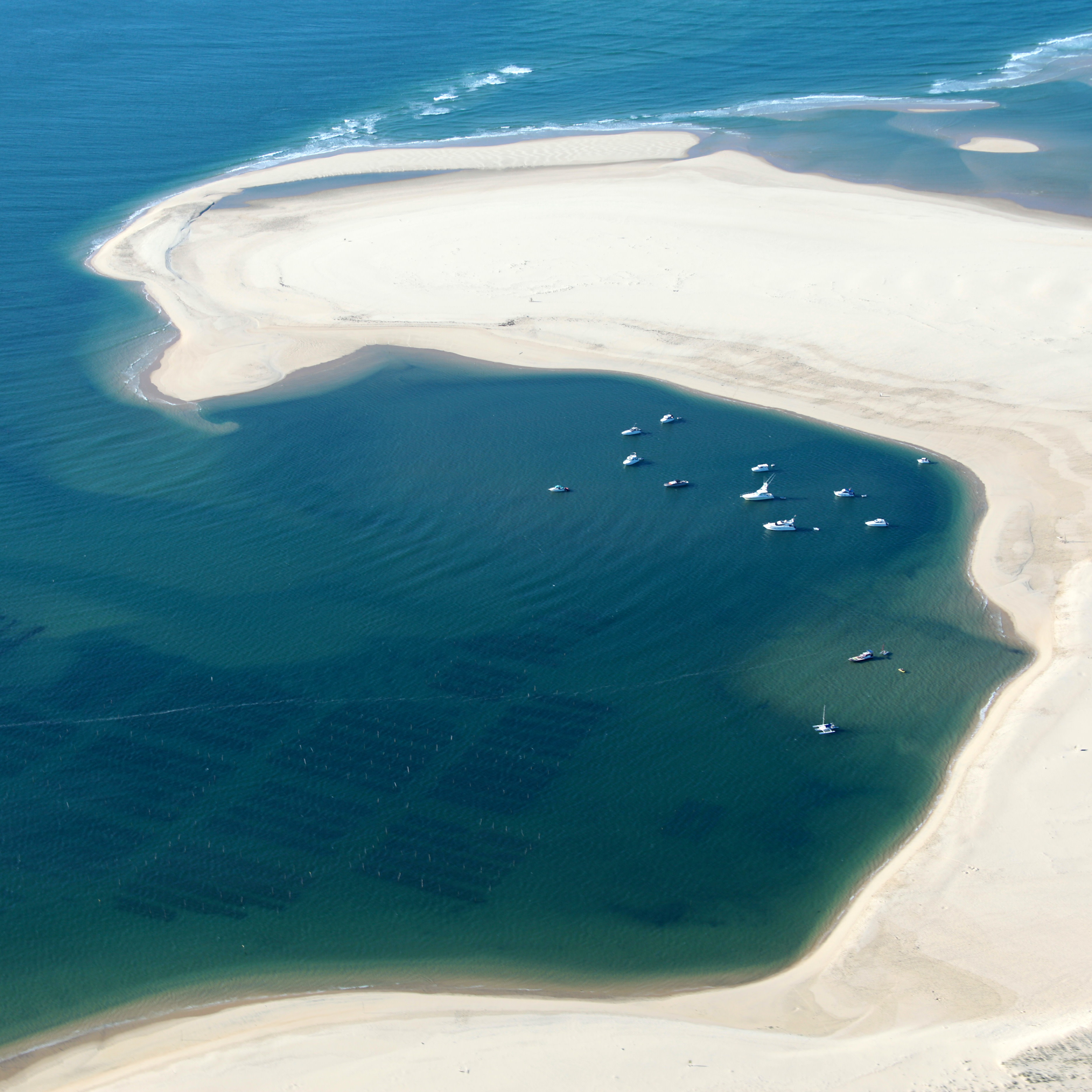 © SIBA  —  The Banc d'Arguin offers the impression of being alone on a desert island.

Picnic on the bench of Arguin
Nope, you are not in Guadeloupe or St. Martin, though this tongue of golden sand and crystal clear water with 50 shades of blue is reminiscent of the tropics. Arguin, a sandbank in the middle of the basin, is constantly changing form according to the wind and currents. You can reach it by boat, shuttle, or pinasse (a unique type of vessel common in the area). It's the perfect spot for a dreamy picnic facing the great Dune. 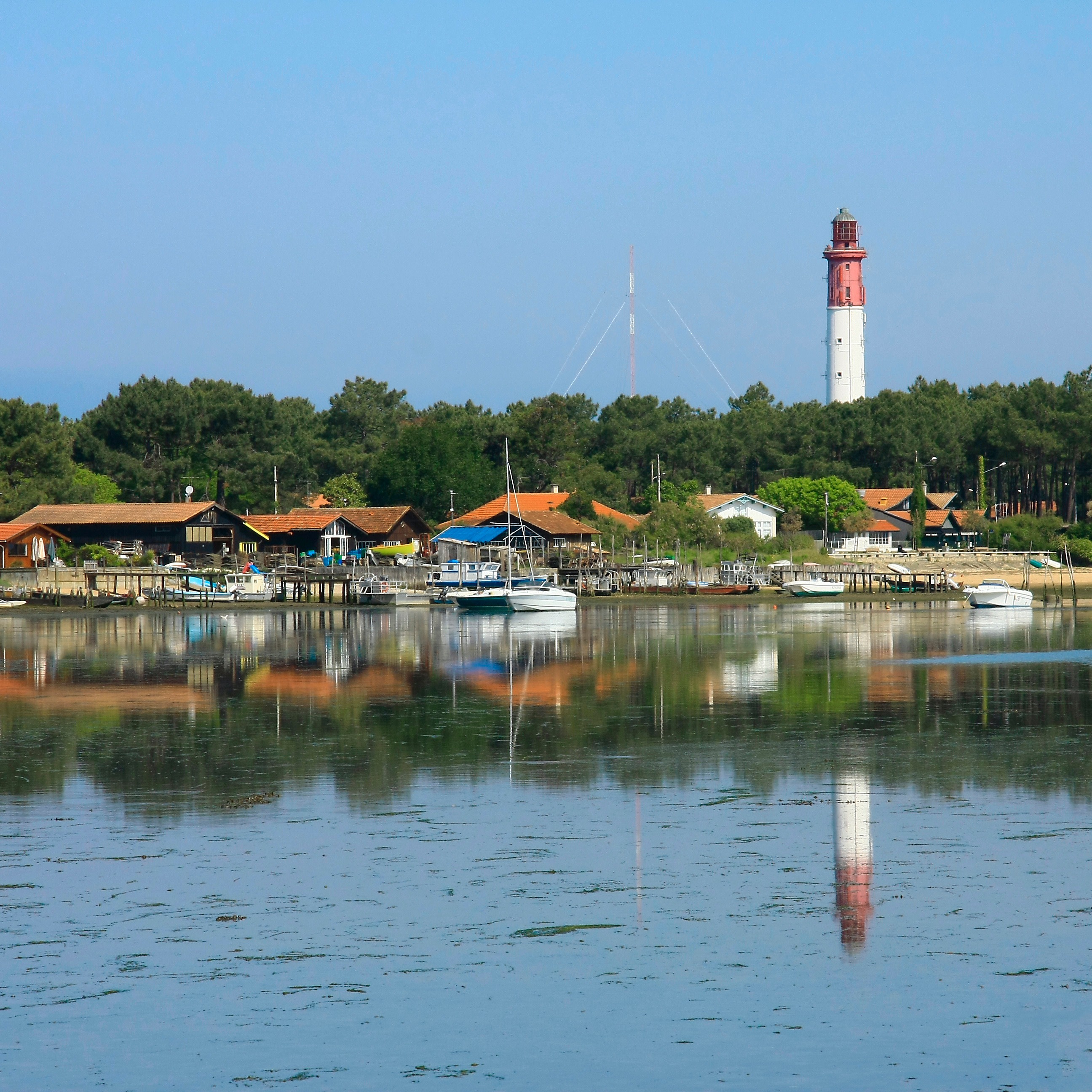 © SIBA  —  The lighthouse dominates the city of Cap Ferret.

Take the height at Cap Ferret
At the tip of Cap Ferret, the calm water of the basin meets the more tumultuous Atlantic. For those with no fear of heights, you should climb up the lighthouse (258 steps!). You will not regret it—whatever's left of your breath after the climb will be taken away from the view. The panorama of the water, the oyster beds, and the Pilat dune, especially during the sunset, are breathtaking. 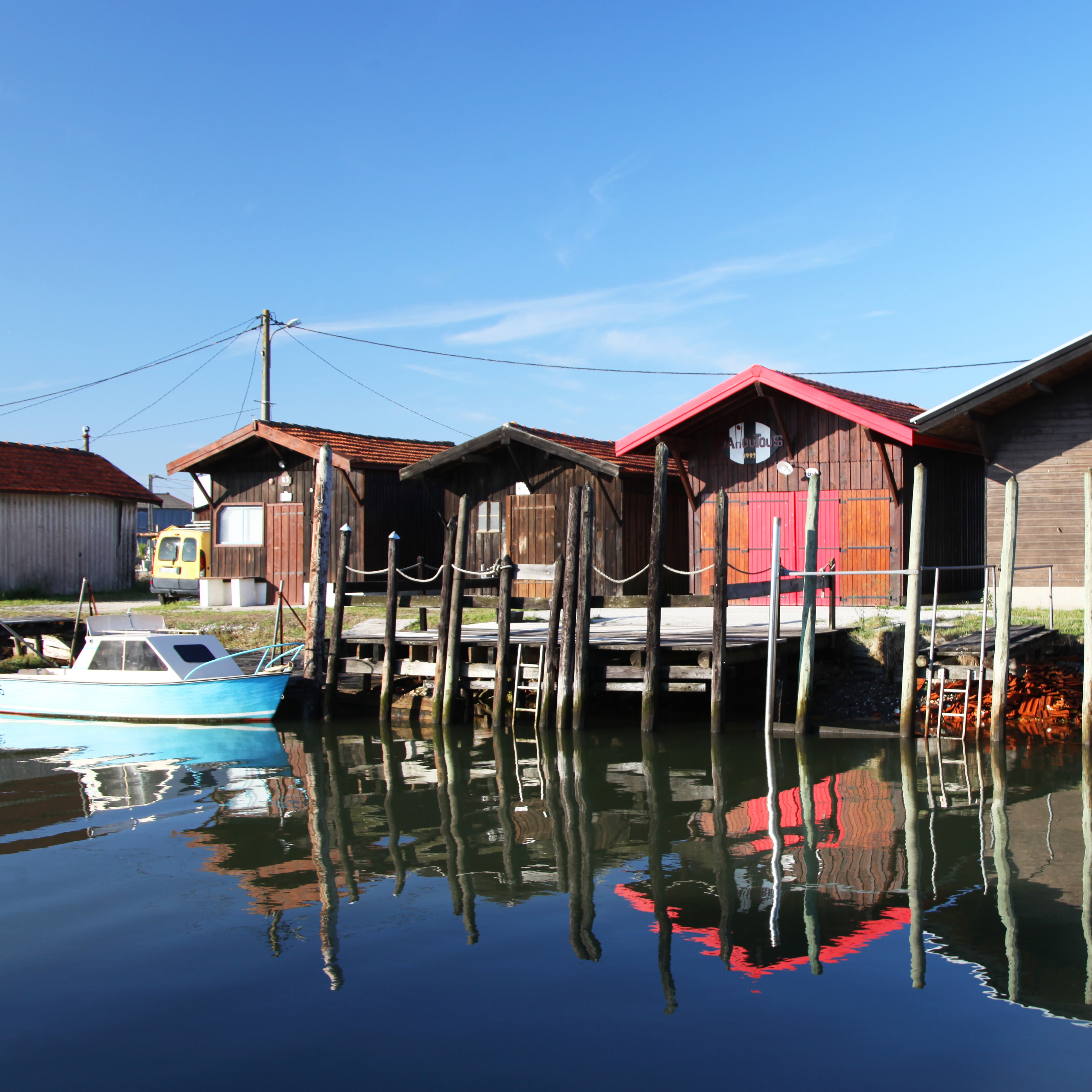 © SIBA  —  The colourful huts of Gujan-Mestras.

Enjoy a dozen oysters
Some simple pleasures of the Arcachon Basin include snacking on oysters opened directly by an oyster farmer, strolling along the colorful huts of the small harbors, and spotting the typical boats coming and going with their tasty cargo through the basin. The oyster capital of Gujan-Mestras has a Museum of Oysters dedicated to the little jewels of the sea. 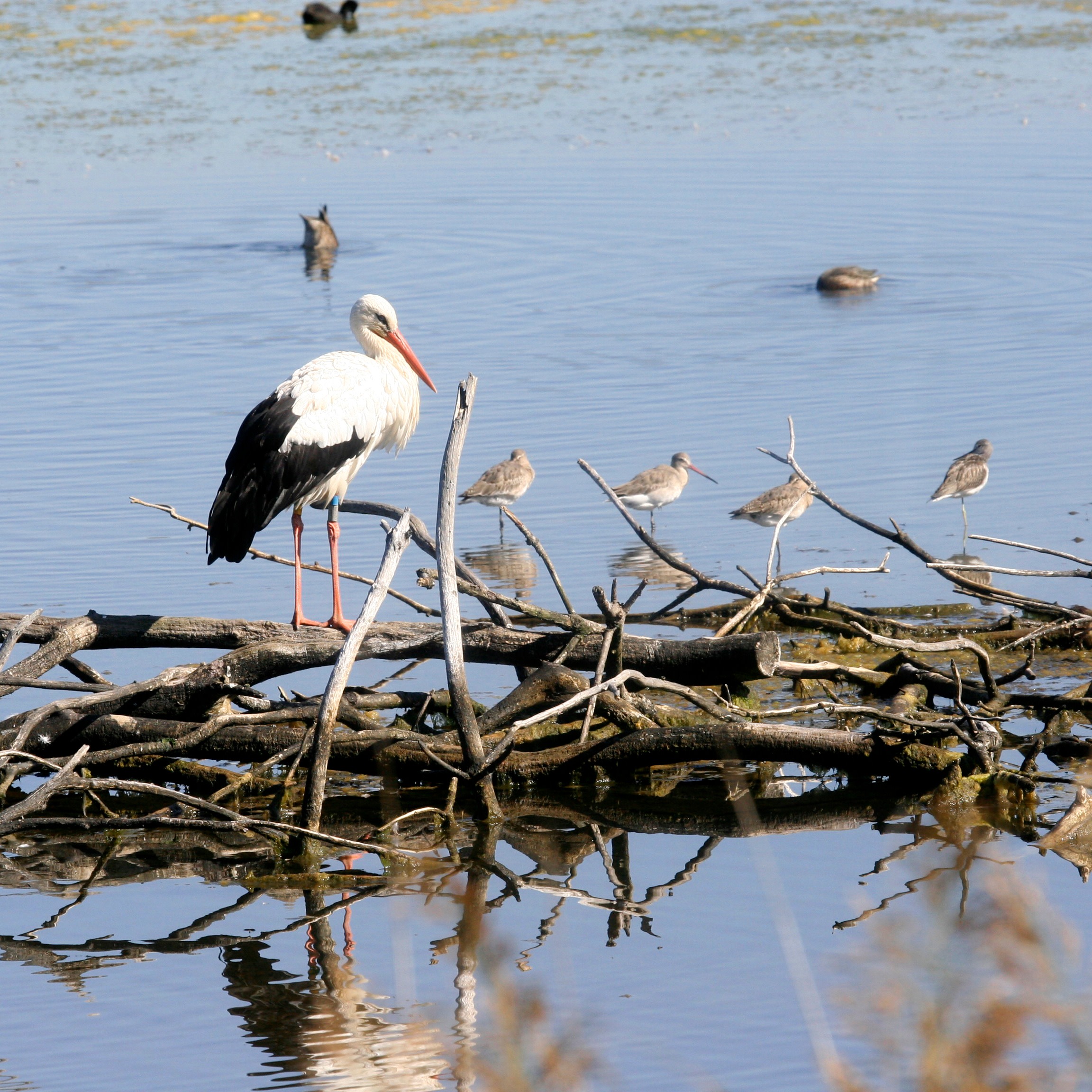 © SIBA  —  The ornithological reserve of Teich is a preserved natural area.

Birdwatch
There are more than 300,000 birds passing through the Teich Ornithological Reserve on the Arcachon Basin, and 260 species recorded, from the little plover to the great white stork. Soaring and flitting between the swamps, roses, meadows and lagoons, the effect of these beautiful birds flying along the landscaped paths will entrance every age group.

Swimming in the waves or at the lake
To each beach belongs a special ambiance: On the Atlantic Ocean coast, be prepared for a bracing and intense dip. On the beaches of the basin, where you swim only at high tide, the tide will be calmer. If you prefer fresh water, head for the large lake of Cazaux, in the heart of the Landes forest. For the most ambitious visitors, you can even sample the three beaches and ambiances in the same day.

Admire the Belle Époque architecture
In Arcachon and Pyla-sur-Mer, the villas are omnipresent—these grand bourgeois houses are from the 19th century up through the 1930s. In Arcachon, in the picturesque district of the Winter City, Swiss chalets, Moorish inspiration, and colonial styles mix genres in an extravagant mélange of architectural tastes.

Journalist-traveller. I often voyage to the end of the world to explore what France offers-- just next door. filliatre.pascale@orange.fr