The Dordogne Valley: what to do, what to see…

As if suspended in time, life in the Dordogne Valley always seems to pass at vacation pace. Ascend the dizzying heights to the cliff-top village of Rocamadour, listen to unspoiled nature, visit one cave after another until you reach Lascaux. And, from picturesque roads to Compostela pilgrims’ paths, every stopping point is a geological masterpiece, a UNESCO World Heritage Site or a gastronomic revelation.

Things to do in the Dordogne Valley

© Lagui - AdobeStock  —  The castle of Beynac, perched on the heights of Beynac-and-Cazenac, has sat overhanging the valley of the Dordogne for more than nine centuries.

This stone sentinel, the authentic fortified castle of Perigord, stands guard on a cliff over the village of Beynac-et-Cazenac, dominating the Dordogne for over nine centuries. To visit the Château de Beynac is to go through the History of France in the footsteps of Richard Lionheart, Eleanor of Aquitaine, Simon de Montfort and the Hundred Years War. The castle represents an unforgettable trip into the heart of the Middle Ages.

• The bastide town of Monpazier 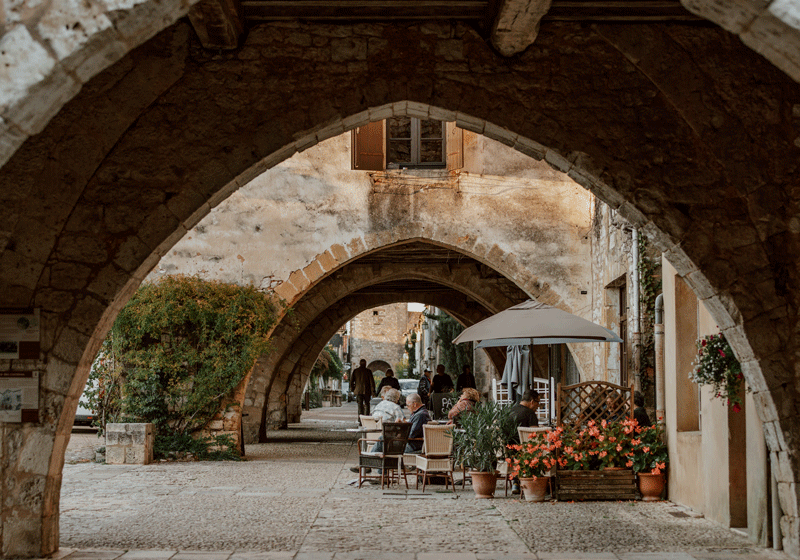 The town of Montazier is between Sarlat and Bergerac, not far from Villeneuve sur Lot, Cahors and Lot. Classified as "One of the Most Beautiful Villages of France", it was raised to the rank of "Grand National Site" for its many riches, including the Bastide de Monpazier (13th century fortified town), an authentic jewel of medieval architecture and a model among the 300 bastides of the Southwest.

• The city-center of Sarlat 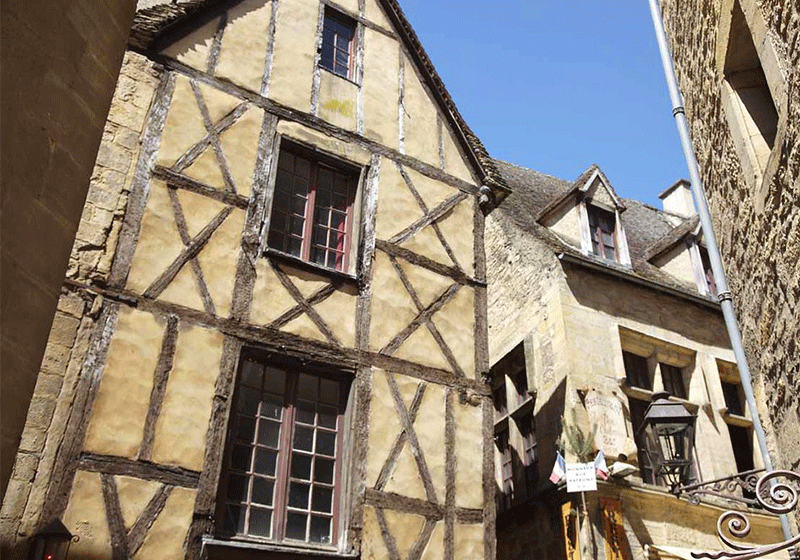 The medieval town of Sarlat-la-Canéda is located in the region of New Aquitaine in the department of Dordogne. It is one of the most beautiful cities in France, capital of the Périgord noir. It offers history lovers no less than 66 classified monuments.
Some of Sarlat's favorite children: Étienne de La Boétie, Maurice Rouel and Pierre Janot, Jean Nouvel, Éric Alégret.

• The chasm of Padirac

The most famous gulf in Europe, is considered as one of the biggest geological curiosities of France. Like Edouard-Alfred Martel who explored it in 1889, you can set sail on the underground river, after a vertiginous descent to 309 feet, to admire the Great Pendeloque, the giant stalactite of 103 meters (337 feet). Continue on foot to the Hall of the Grand Dome whose vault reaces 94 meters (292 feet) high.

• The cave of Lascaux IV 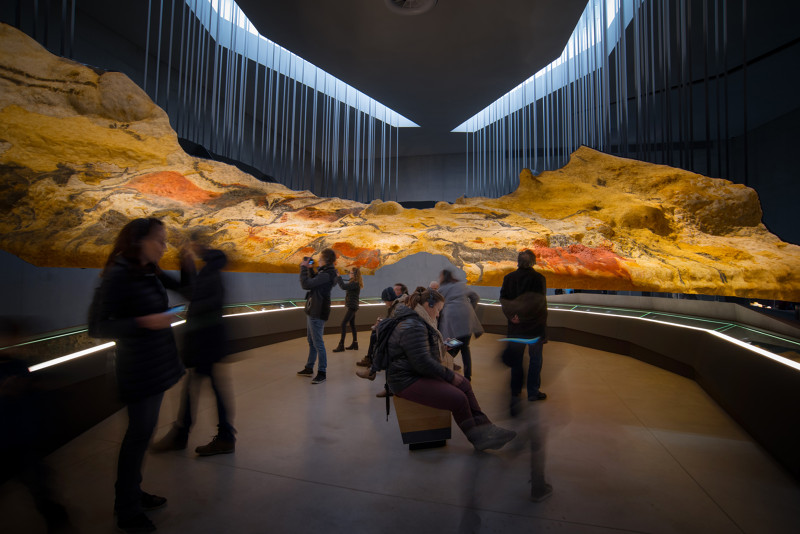 Discovered in 1940 by four teenagers, the cave of Lascaux harbors incredible prehistoric treasures. Degraded by overcrowding, it closed in 1963. Since 2016, an identical reconstruction has been open to the visitors, in the heart of the International Center of Parietal Art, at the foot of the hill of Lascaux.

At almost equal distance between Bergerac and Sarlat, founded in 1115, you can find the abbey of Cadouin, with the original abbey church, sacristy and Romanesque base of the buildings. The flamboyant Gothic cloister dates from the end of the 15th century. The monastic activity of Cadouin was interrupted in 1790 during the French Revolution.

This old medieval fortress was transformed into a pleasure palace in the 17th century. A rare testimony of classical architecture in Périgord, the castle houses a collection of furniture and works of art of the 17th and 18th centuries. The château's French-style gardens are classified "Historical Monument" and its English park, are also to admire.

• The gardens of Marqueyssac in Vézac

The hanging gardens of Marqueyssac are on the list of "classified sites." Set on a rocky outcrop, this 22-hectare park dominates the valley with its high cliffs. Romantic and picturesque, it serves as a haven for an early 19th century castle, on more than 6 kilometers (3.7 miles) of shady walks, lined with 150,000 hand-cut trees, and decorated with gazebos, rock gardens, waterfalls and theaters of greenery!

• The village of Beaumont du Périgord

The Bastide de Beaumont, founded in 1272, has been considerably renovated over time. The fortified town preserves much of the rich heritage of the Middle Ages, such as the fortress church and the Luzier gate, listed as a Historic Monument. On foot or horseback, the 100 kilometers (62 miles) of well marked and easily accessible hiking trails allow you to ramble through the surrounding countryside.

Things to do in Dordogne Valley

© Thomas Launois - AdobeStock  —  Canoeing or swimming, you can discover the Dordogne valley from the river and admire picturesque villages, like the one pictured here: La Roque-Gageac.

This not-quite Jurassic park that allows you to go back in time—in the heart of a preserved forest, all along a soundtrack, more than 150 life-size shows allow you to discover the extraordinary world of dinosaurs, until the evolution of the man with a fully reconstituted Neolithic village. The star of the park: a giant animated T-Rex 9 meters (29 feet) long and 6 meters (20 feet) high!

• Cool off in the Dordogne and Vézère rivers

During the hot Southern summer, the Dordogne Valley happily abounds with lakes, streams, small secret coves and waterfalls. The beautiful sandy beaches are tranquil settings for napping or picnics with the family. Note that the Dordogne is the only river in France to be classified as a World Biosphere Reserve by UNESCO.

Hercule Savinien de Cyrano, who inspired Edmond Rostand, was born in Paris in 1619. At the age of 19 he joined the regiment of the "French Guards," mainly composed of Musketeers. He then took the Gascon name that we're all familiar with: Cyrano de Bergerac. He handled the sword as well as the pen, much like Edmond Rostand's archetypal Gascon hero. The first performance of the play took place in Paris in 1897 at the Porte Saint Martin theater.

Located near the main sanctuaries of cave art, this museum is equal parts place of memory for the history of prehistory, a conservatory of objects, a center of studies and a place of dissemination of knowledge in constant evolution.
Since its creation in the early twentieth century, it has become a reference point for prehistorians and visitors alike.

• Marvel on the heights of Domme

About 12 kilometers (6 miles) south from Sarlat, Domme is perched on a vertiginous cliff offering an exceptional view of the Dordogne valley and the lovely neighboring villages of La Roque-Gageac and Beynac-et-Cazenac. This bastide built of golden stones marries the architectural, natural and gastronomic heritage of the Périgord Noir.

Issigeac's medieval streets wind like a nautilus, resurrecting the past: it is a village rich in history and architecture, where artists and craftsmen have made their home. The Sunday market here is a must-see. Small in the winter, it occupies almost the entire village in summer. You can find almost anything you want in this bouquet of goods.

• Immerse yourself in the secrets of the cellars of Monbazillac 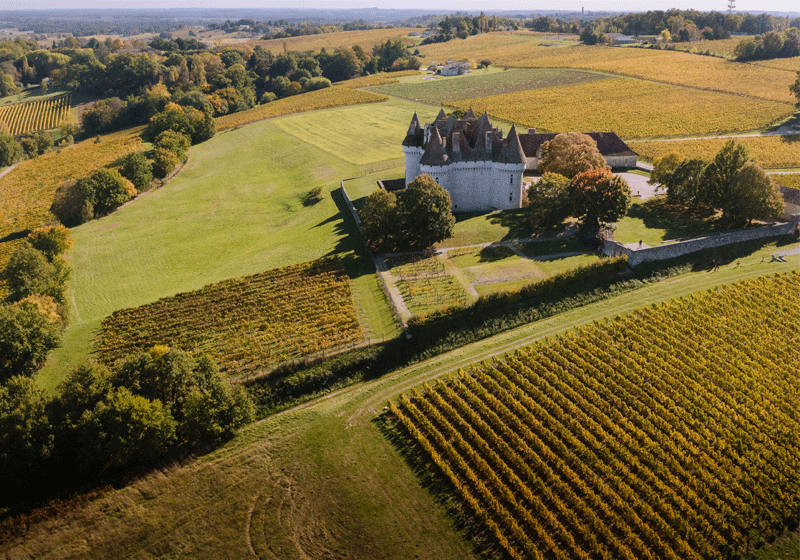 A true wine-growing nucleus in the heart of the Périgord Pourpre and 5 kilometers (3 miles) from Bergerac, the geographical area of Monbazillac is raised on terraces and hillsides that extend from the left bank of the Dordogne to the right bank of the Gardonnette. This area covers the territory of 5 communes, representing a quarter of the bergeraçois vineyard. During your visit you will discover the meaning of Eocene and Oligocene, a molasse, and many other secrets about the wine of the region.

Built in the 15th century, the Château des Milandes—labeled one of the "Houses of Illustrious" —is still inhabited by the soul of Joséphine Baker, who lived there for almost 30 years. An American from Missouri, advocate for equality, star of the music hall and a decorated resistance fighter of the Croix de Guerre and the Legion of Honor, she adopted 12 children and created the "Rainbow Tribe" of her family.
Labeled a "Remarkable garden" in 2016, the castle park, which overlooks the birds of prey shows on a terrace lording over the valley, has regained its past splendor.

The editorial staff of France.fr follow the trends and news of destinations to bring you stories from France that reveal its innovations and traditions revisited and make you long to (re) discover its territories.

Getting to the Dordogne

Culture
Culture
The 10 must-see panoramas in the Dordogne Valley

Prepare to be dazzled! The Dordogne Valley, with its deep gorges and steep-sided valleys, is the home to stunning...

From the castle of Bourdeilles to that of Fénelon, through Monbazillac, Les Bories, Lanquais, en route to the beautiful...

Twice a week, the heart of the medieval town buzzes with colourful stalls overflowing with local produce and tales of...

Culture
Culture
Surprise your kids with these six super ideas for...

The elegant city of Bordeaux has undergone a massive regeneration programme and the capital of New Aquitaine now has...

Culture
Culture
The 10 must-see panoramas in the Dordogne Valley

Prepare to be dazzled! The Dordogne Valley, with its deep gorges and steep-sided valleys, is the home to stunning...

From the castle of Bourdeilles to that of Fénelon, through Monbazillac, Les Bories, Lanquais, en route to the beautiful...

Twice a week, the heart of the medieval town buzzes with colourful stalls overflowing with local produce and tales of...

Culture
Culture
Surprise your kids with these six super ideas for...

The elegant city of Bordeaux has undergone a massive regeneration programme and the capital of New Aquitaine now has...