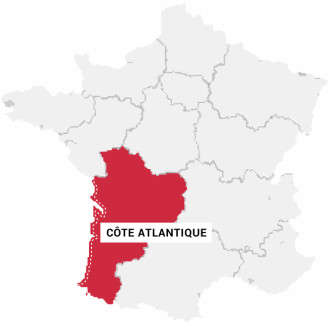 The Atlantic coast runs for miles and miles! We’ll show you around! From Ré to Oléron, we’ll drift happily from island to island. We’ll make landfall in Arcachon Bay, get stuck into a basket of oysters and get a taste for wakeboarding. Prefer a road trip? You can borrow our scooter. This way to Médoc and the wine routes, and that way to the Landes, Biarritz and La Rochelle. See you in the Pays Basque for the Cesta Punta international Basque pelota championships!

So, you’ve only got three days to discover the Bay? Here’s a quick little guide for tasting, exploring, meeting and...

La Vélodyssée is the longest bikeway through France. On the Gironde stretch, head off from the Pointe de Grave in...

Culture
Culture
A long weekend in the Basque Country, without a...

Known for its gastronomy, beautiful beaches and unique culture, the French Basque Country is the perfect destination for...

No, camping is not just for summertime holidays! Discover my selection of campsites open all year round. An opportunity...

Ocean
Ocean
The Atlantic coast by bike… a real odyssey!

Driven by the desire to experience travel a different way, one that is closer to nature, Vanessa Lecaille set off on an...

Ocean
Ocean
Ile d’Aix, my paradise on earth, where the...

She knows every square inch of Ile d’Aix’s hundred or so hectares like the back of her hand, she visits the African...

Hugo Guias is a professional kite-boarder. His family has roots on the Ile de Ré, and he moved there when he was still...

The feast of Saint John is a time for getting together with friends ! Clément was born in Les Landes, and...

The Fort Boyard is a key element of the Naval Dockyard of Rochefort which extends all along the estuary of the Charente.
If the construction of this fortification on the "Longe of Boyard" was considered as early as the seventeenth century, the project only really started in the course of the 19th century. Built with the aim of protecting the harbor, the mouth of the Charente and especially the large dockayrd of Rochefort from the assaults of the English navy, the Fort was transformed into a prison a few years after its completion.

The Fort has been classified as an historic monument since 1950.

The Fort is 68 metres long on 31 metres large, for a total surface area of 2689 square metres. The surrounding walls peak at 20 metres. The fort is also built on a sandbak called "Longe of Boyard" which gave its name to the Fort itself.

Since 1990, Fort Boyard has been the location of a television game of the same name.

Located between the islands of Aix and Oléron, the Fort Boyard is part of the territory of Rochefort-Océan. Many departures of cruises are possible to bypass the Fort (from Port-des-Barques, Fouras-les-Bains or the Island of Aix).

There is a charge for the boat tour of the fort.

Wild beach near the town centre.
Bordered by part of the fortifications of the island, the West Beach offers a magnificent view of the island of Oleron and Fort Boyard. At low tide, fishing is practicable.

Ideal beach for sunbathing or swimming in the sea.
Overlooking the lighthouse of the island of Aix, this charming beach is located near the pier. Its intimate looks and its panorama of Fort Boyard make it a pleasant place to swim. Sandy beach, accessible to any tide, with a unique view of Fort Boyard.


The fortification presents a museum space to discover the military role of the island of Aix in the defence of Rochefort and its arsenal.

Library of the Isle of Aix

5,000 books available, more than a third of which are intended for young children and teenagers.

French Sailing School.
The "Cercle Nautique de l'Ile d'Aix" is a sailing club welcoming you to a wide range of sailing activities!
-> First trip: an introduction to sailing of all kinds with an instructor
-> Sailing courses for ages 5 and over
-> Trimaran trip for 5 to 6 people (including instructor)
-> Introduction to the sea world: an educational visit to the foreshore
-> Groups welcome
-> Standup paddleboard, single or double kayak, Catamaran F1 rentals
Have fun with your family or friends.
The CNIA now has a MEGA SUP AIR (paddleboard for several people), available for rent from Monday to Saturday.

Now a historical monument, it is the house in which Napoleon surrendered to the English.
Discover the last home of Napoleon I on French soil before his exile to Saint Helena in 1815. The Napoleon Museum exhibits numerous relics that once belonged to him (furniture, portraits, keepsakes.). By the looks of its, it's almost as if the Emperor never left the house.

The island of Aix, classified as a remarkable natural site, is an invitation to travel and get away from it all. It is only accessible by boat, all year round, from the Pointe de la Fumée in Fouras-les-Bains.
The insular charm of a military land: peacefull island, you will discover it on foot, by bicycle or in a carriage. With its fortified village, its coastal batteries, its forts, including the famous Fort Boyard, the island is a place out of time, charming lovers of history and children dreaming of adventures. The only "true" island of Charente-Maritime, Aix Island draws a great pride in its imperial past. Under the First Empire, it was transformed into a fortress island and became the cornerstone of the defense of Rochefort. After a first visit in 1808, the Emperor Napoleon I went to the island again in July 1815 and settled for 3 days in the house of the Governor, his last residence on French land before his exile in St. Helena. It is also on the Aix Island that you will find one the last workers of the Mother-of-pearl in France. A remarkable natural site: The Aix Island, 3 km long and 700 m wide, concentrates all the diversity of the coastal landscapes of the Charente-Maritime. Classified on the list of "Remarkable Natural Sites", it is a fragile place that one must respect.


Advice: The dunes protect the coastline, help to protect it by respecting the paths without straying. Preserve the flora and do not pick the flowers. Keep the island clean by taking your rubbish to the mainland.


The fortified village by Vauban is located on the southern part of the land, bordered by beaches, creeks and rocks.


The island, accessible only by boat, is in the heart of the pertuis of Antioch, between the island of Oléron and and the peninsula of Fouras.

Africa on the island of Aix.
Africa on the Aix Island : The creator of this museum, Baron Napoleon Gourgaud (1881-1944), liked to hunt in Africa and he was passionate about ethnography and the natural sciences. In this museum, numerous collections of trophies, sculptures and ethnographic objects that the baron brought back from his many expeditions in Southern and Eastern Africa and his animal dioramas representing the African fauna realized by the Londoner taxidermist Rowland Ward.

Take one of the 3 orienteering courses to do on the on the island of Aix. Thanks to the map, find the markers in a given sector and punch your sheet.

Take one of the 3 orienteering courses on the Port-des-Barques peninsula with you! Thanks to the map, find the markers in a given sector and punch your sheet.


The year is 3033, COSMAIX, descendant of an "aixceptional" Aix family, has lost the Ariadne's thread of his history to continue his journey in his galaxy. His vital energy is in peril! Your mission? Help him to reconstruct the history of the Aixois and to take up a maximum of challenges to reach the Aixceptionnel. Only a courageous and perceptive family in the 21st century will be able to bring COSMAIX back into its history.


Enjoy your trip to the island of Aix...

Take a tour of the island of Aix in the manner of the Gourgauds...
It was in 1925 that the destiny of the Gourgaud couple, Baron Napoleon and his wife, Eva Gebhard, a wealthy American heiress, crossed that of the island of Aix.
Culture, Social, Public Services, History, Tourism... five major areas are still signed by the Baron and Baroness.
An original tour which will reveal to you some interesting anecdotes, unpublished photos, some tips and tricks to discover the island and the secrets of this sacred history!
Enjoy your trip to the island of Aix...

On sale at the Rochefort Océan Tourist Office.

The House of the Mother-of-Pearl

Discover the one and only know-how of one of the last nacre makers of France, the unique handmade speciality of the island with more than 60 years eperience.
The House of the Mother of Pearl has been existing since 1954, and is specialized in the transformation of shells into various objects, including jewels.


A sales and exhibit area

- A workshop and a meeting with a mother of pearl craftsman.

Here, you will learn about the life of marine molluscs and the constitution of their shell, the different stages of shaping of this rare and noble material. Furthermore, you will admire original creations.

Marina of the Island of Aix

Visitors: possibility of disembarking passengers on the large pier BARBOTIN or quay of the ACADIE boaters not priority

Visitors' deadbeds are white and marked in green.

The blue deadbeds, for a 2 months summer rental.

The red deadbeds, for yearly rentals.

They are accessible 2.5 hours before and after low tide and are sheltered from the west winds.

Shuttle service from May to the end of September

Water and electricity at the dock

Showers with ticket at the Pierre & Vacances residence


Reduced rate or "group" rate for :


After crossing the famous Ford Boyard, you will reach the Island of Aix. Protecting the Charente estuary from the northwest, the island alone offers the diversity of Rochefort Ocean's riches:

¤ the remains of an exceptional military heritage

On foot, by bicycle or in a horse-drawn carriage, you will walk in the footsteps of Napoleon I to discover, not without surprise, a coastline with multiple landscapes


Other services available at the stopover:


Please note: there is no ATM on the island of Aix.

However, because of the intensification of the conflicts between France and England, the priory, repeatedly plundered and damaged, was abandoned in 1343. Of the whole church, only the eastern wing of the priory remains today, and the transept, the northern apse and the crypt of the church. The crypt, which certainly dates back to the foundation of the church, testifies of the religious history of the island.