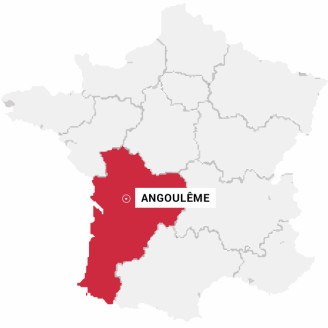 Visit Angouleme! We’ll help you fill up your photo album. We’ll snap wall murals and museums, sip coffee in stylish bistros, and settle down for a restinthe shade of Romanesque churches. French-language cinema...multicultural music... we’ve got tickets to every festival! At the Graphic Novel Festival, we’ll sketch the artists as they doodle away. We’ll secure pole position for the Circuit des Remparts, and cross the finish line together against the most Instagrammable view in Charentes.

Cities
Cities
10 things to do in Angoulême to ensure you have...

Must-sees, must-dos, must-tastes during a trip to Angoulême… From the ramparts of the city high on the plateau to the...

Daniel Selig writes comic books. Every year, he heads to the Angouleme International Comics Festival, a major event that...

CroisiEurope takes you from Bordeaux aboard the MS Cyrano de Bergerac, an impressive floating hotel, to make one of your...

Follow me, let’s take a stroll through the market. Closeness, choice, product diversity, just waiting to be discovered...

Culture
Culture
A 7-Day Nouvelle-Aquitaine Road Trip by Along...

In this post, we share the 7-day road trip route we followed through Nouvelle-Aquitaine to give information &...

Cognac, located some 44 kilometres from Angoulême, has been cultivating the art of distilling wine and its lees using...

What should you definitely see, do and eat when you visit Angoulême? From the Plateau ramparts on the banks of the...

11.7 km mountain bike itinerary from the football pitch in Mosnac

Welcome to the 'Domaine des Quillets'.
Since five generations we produce the cognac 'Paul Rumeau'. We produce, distil and age all our production at the Domaine.
During the visit you will be able to follow the evolution of the grape and discover the different production methods of Cognac and Pineau des Charentes. Finally, we will invite your taste buds to discover our production during a free tasting.
Product details: Cognac VS / VSOP / XO - Pineau des Charentes red / white - Liqueurs
HVE (high environmental value) operation aimed at conserving biodiversity and nature.

Terra Aventura is a treasure hunt inspired by geocaching.
To play, you must download the application on your smartphone (androïd or apple) or bring you a GPS, thinking to print beforehand the list of clues on the website. Then you will leave a starting point referenced by GPS coordinates. Throughout the way, characters named "Poï'z" will accompany you in search of clues. These clues will allow you to complete the GPS coordinates of the location of the cache.

On the territory, you can enjoy a 5 km walk in village of St-Simeux on the banks of the river Charente.
The poï'z "Zéidon" will guide you along the way and once the cache found, you will leave with a surprise!

On your way to Villebois-Lavalette? Looking for a place to eat? Stop off at the Chadurie picnic area, just a few meters from the village hall. The area is shaded and has green areas to lie down.
There are four wooden tables around the village hall. There is a small garden where you can take a walk and enjoy a digestive stroll. If you still have time, visit the old village wash house on the other side of the D438. Be careful when crossing the road!

Country house renovated, stone, with a walled garden in a small hamlet 3 km from the village of Chateauneuf, and 2 km from the river Charente and swimming.
Ground floor: dining room - kitchen, living room (access by 4 steps), wc, 1 bedroom (access by 2 steps) with bed 140 and dressing room, storage room. Floor: 1 bedroom with bed 140 and cot, 1 bathroom with toilet. DVD player and VCR. Bicycle shelter, gantry. Heating to be regulated on site, on record. Possibility of photo internship during your stay.

In charge of a 180 cows farm, Christophe Gendronneau opened in 2009 a laboratory in his farm to develop his business and increase the value of his beef. Although he is in a responsible agriculture, he also uses inputs from organic agriculture to cultivate 200ha of lands and cereal fields. The animals are exclusively fed with farm products. Christophe hopes to open soon a producers' shop with a butcher's and a bakery.

Direct selling at the farm from wednesday to saturday, from 8:00am to noon.

Just a stone's throw from the Coteaux du Blanzacais and its vineyards, come and enjoy a tasty moment with your family at the Bécheresse picnic area. You will find a space fitted out with oak trees, a table and a bench.
Once seated, you will have the opportunity to admire the façade of the Saint-Barthélémy church located opposite the area. All the conditions are therefore in place to guarantee you a good meal. Enjoy your meal!

The 22nd European Balloon Cup will be held from 4 to 7 August 2022!
A major event of international renown, this event will bring together about sixty hot air balloons from fifteen countries for a breathtaking event.
The best crews will compete in the art of directing... a non-dirigible craft!
The official competitions will be punctuated by aerial demonstrations, hot air balloon baptisms and shows. A large air show hosting collector aircraft will close the event as always, on Sunday, 1st August in Mainfonds.
For 25 years, the Montgolfières Cup in Charente has attracted nearly 1,500 hot air balloons, major air shows (Christian MOULLEC and his geese, world champions of aerobatics, acrobats on aircraft wings, airplanes legends and air patrols: patrol of Morocco and patrol of France) and half a million spectators.

Hota air balloons will take off at different moments during the competition: (programme 2020)
- The 31st of July in Semussac, at Didonne Castle
- August 1st at Génétouze, at the Haute Saintonge mechanical center
- August 2nd at Angouleme, on Île aux Vaches
- August 3 in Jonzac at the airfield

The event will end on Sunday in Mainfonds and throughout the day you will admire the air meetings (from 10am), the flight of balloons (from 6pm) with also a cabaret and fireworks in the evening.

The event takes place every 2 years.

The European Hot Air Balloon Cup makes thousands of spectators dream every two years in the South Charente.
An internationally renowned event, it is accompanied by the Nouvelle Aquitaine Air Show, an air showcase of French aeronautics!
The best crews will compete in the art of flying... a non-steerable craft! The official competitions will be punctuated by aerial demonstrations, hot air balloon baptisms and shows. A large airshow with vintage aircraft will close the event, as always, on Sunday in Mainfonds.

This great event has two parts: (the European Cup and the animation) and involves two different balloon stages:
- The COMPETITION, which tests 40 hot-air balloons, i.e. 40 crews composed of a pilot, a co-pilot, a recuperator and a crew member who helps to install the balloon
- The FIESTA part, which includes 20 hot-air balloons, composed of a pilot and a crew member. These are intended for first flights by partners, sponsors and the public.
The 60 hot-air balloons take off at approximately the same time. The launch sites for the competition are known at the last moment,
while the Fiestas' launch sites are identified in the "Animation and Fiesta" section.

The event ends on Sunday in Mainfonds and during the whole day you will be able to admire the air shows (from 10am), the hot air balloons (from 6pm) with also a cabaret and fireworks in the evening.

The event takes place every 2 years.

In contrast to the "classic" churches of Charente, the church of Saint-Médard de Mainfonds has a Greek cross plan. This monument was built in the 12th century.
In the centre of the church, a dome can be seen. The apse, a little further on, forms a half-dome. It is decorated with arcatures and lit by three windows. Above it stands a bell tower, which probably dates from the construction of the church.

Direct sales of Pineau and Cognac but also cocktails, liqueurs elaborated in a natural way following the rules of a viticulture which respects the environment.
Visit of the domain (in french only) by reservation.

In the middle of the village of Champagne-Vigny, on the town square, come and enjoy a relaxing break with your family in a green setting. This picnic area will guarantee you access to a table, a bench and a public toile
After your gourmet break, you can continue your walk by visiting the Maine Giraud, the wine estate of the poet Alfred de Vigny. You will be offered a tasting of his best pineau and cognac, as well as a free discovery of his museum dedicated to the poet.