Portrait : Coco Chanel, a woman both daring and free

Discover the portrait of the fascinating, free and modern Gabrielle Chasnel, who put her talent towards the service of women's emancipation. And it all began, as you may know, right here in Nouvelle-Aquitaine!

Gabrielle Chasnel, the future “Coco Chanel”, is the symbol of French elegance. She was born in 1883 and her life was nothing short of a novel. Gabrielle was an accomplished businesswoman and to this day, she remains the incarnation of a woman both free and ahead of her time.

Gabrielle and Aubazine abbey in Corrèze

Orphaned and abandoned at the age of 12, Gabrielle was taken in at the Aubazine abbey, in Corrèze, along with her two sisters. Her days in Aubazine had a major influence on Gabrielle and guided her throughout her career : a predilection for black, white and beige, clothing with refined lines, reflecting the austere life at the Cistercian abbey.

The famous Chanel logo, 2 intertwining "C"s could be seen on the abbey’s stained-glass windows.

Another crucial fact about her time at the abbey : it is here that she was taught to sew, by nuns.
Furthermore, she was inspired by the architecture of the place for the design of her villa "La Pausa" in Roquebrune (Alpes-Maritimes) in the 1930s. She greeted many celebrities there, such as poets Pierre Reverdy and Jean Cocteau, actress Greta Garbo, artist Salvador Dali and his wife Gala and the British politician, Winston Churchill.

She began her career in 1903. With the help of her aunt, the strong-willed Gabrielle learned to become a dressmaker in a workshop that confected trousseaus and baby-clothing. She also loved being on stage and would frequently sing in cafés, in Vichy. « Coco » got her nickname from a popular song she used to sing: « Qui qu’a vu Coco sur le Trocadéro? » (Who has seen Coco on the Trocadero? »)

In 1910, she began making hats, borrowed money from a friend and opened her first boutique : « Chanel Modes » at 31 rue Cambon in Paris. Later on in 1913 and 1915, she opened two more boutiques, one in Deauville at Hôtel Normandy, the other in Biarritz.

Biarritz is where she set up her first fashion house and imagined her first creations.
Back then, Biarritz (like Deauville) was already a very fashionable seaside resort. Sea bathing had become quite fashionable, and her boutiques rapidly became “the place to be” for the elegant and aristocrats. Hotel du Palais is famous for hosting the most popular social events.

Coco in the post-war years

After the First World War, Gabrielle sought to make women free to move about and to release them from the corseted dresses of the time. She created new types of sober yet modern women's clothing which quickly became popular thanks to their flexibility and comfort: jersey sports dresses (Gabrielle began using jersey after the war as there was a fabric shortage), short, pleated skirts, loose-fitting pants and beach pyjamas as well as her famous “marinière” (striped jersey).
Her swimsuits were also very successful and were even painted by Picasso in his “Les Baigneuses” painting, in the summer of 1918.
Coco Chanel was also the first woman to make it fashionable to have a tan and she created the first line of tanning creams. She enjoyed playing many outdoor sports: golf, skiing, yachting, fishing, horseback riding...

In 1921, Coco Chanel purchased two new buildings in rue Cambon, in Paris (the fashion house headquarters), and became the first woman to launch her own perfume : « Chanel N°5 », a floral fragrance created by Ernest Beaux, a Russian-born French perfumer, who was also perfumer to the royal court of Russia.
In 1926, she designed the famous little black dress, inspired by the dress she used to wear during her years at the Aubazine orphanage. The model quickly became a classic of the fashion house.
Coco Chanel’s success was dazzling. In 1935, she employed more than 4,000 workers and 28,000 models of clothing were created in her workshops each year.

Her line of clothing and her new-look accessories crossed the Atlantic Ocean, over to the United States, where she worked for the film industry, dressing stars such as Marilyn Monroe, Elizabeth Taylor and later on, Jane Fonda and Jackie Kennedy.
In Paris, she often rubbed shoulders with and helped artists, painters, composers, writers, and poets.
Maurice Sachs said of Coco: "She was not regularly beautiful, but she was irresistible. Her speech was not dazzling, but her mind and heart were unforgettable. "

What would France be without Coco ?

When World War II began, Coco Chanel presented a « bleu-blanc-rouge» (red, white and blue) collection, then decided to close her fashion house. She kept her perfume shop open and lived in a suite in the Ritz Hotel in Paris. This troubled period of her life remains unknown. After the Liberation, she moved to Switzerland on the shores of Lake Geneva.

She returned to France in 1954 at the age of 71, moved into the Ritz in Paris and created new collections, whose models have become timeless basics.

An exceptional and inexhaustible businesswoman, Coco Chanel remains a model of audacity and non-conformism. She marked the world of fashion with her style and is still a reference for fashion throughout the world today.

A feminist before her time, she advocated independence and freedom: "don't clear the table unless men get up to do it too", a remark that was inconceivable at the time and reveals her strong, self-assured personality.
Coco Chanel was independent in both her personal and professional life and enjoyed great friendships and passionate love affairs.
Watch the video : Coco Chanel "Les femmes sont toujours trop habillées” (Women are always overdressed").

The "Grande Mademoiselle" died on 10 January 1971 in her suite at the Ritz Hotel in Paris, at the age of 87. The day before her death, she could still be found in her studio, checking the smallest details of her new collection, presented posthumously on January 26th.

Follow us, the editors of Nouvelle-Aquitaine-Tourisme.com as we show you around… our home.
From the peaks of the Pyrenees to the Marais Poitevin canals via the wharfs of Bordeaux, the beaches of the Atlantic to the shores of Lake Vassivière near Limoges, Nouvelle-Aquitaine is full of fascinating, entertaining stories that will amuse one and all. 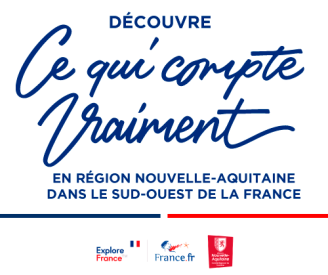 Here are some original ideas for everyone from 7 to 77! Discover some unexpected places or rediscover them from a new...

Culture
Culture
Portrait : Coco Chanel, a woman both daring and...

Here are some original ideas for everyone from 7 to 77! Discover some unexpected places or rediscover them from a new...

Culture
Culture
Portrait : Coco Chanel, a woman both daring and...